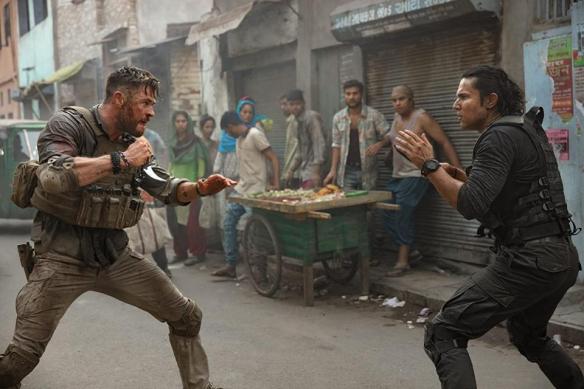 The Bangla response to Netflix’s EXTRACTION is predictable; we surmise the outraged viewers from Dhaka have helped propel the film to #1 on Netflix. Towheed Feroze‘s complaint is, ahem, accuracy: “The police are seen driving Indian-made Hyundai cars; our police does not use this brand. The trucks and other vehicles do not represent Old Dhaka either. Parking a few CNGs here and there in a sequence is hardly convincing. The language used is not a Dhakaiya dialect, but Bangla from West Bengal.”

And, don’t forget: “In reality, when foreigners are in Old Dhaka, they have large groups of people admiring or trying to talk to them. Even if locals do not get close, they follow them from a distance.”

For the crowdsourced feedback, the biggest crime is the Yellow Filter.  As Elizabeth Sherman tabulates: “Extraction is hardly the first movie to employ such an unfortunate color palette: Darjeeling Limited used it in scenes depicting small villages in India. The tone of Traffic, a 2000 movie directed by Steven Soderbergh that focused on the drug trade in Mexico, turns undeniably yellow during an execution scene in the desert (shots of Michael Douglas, who plays a judge from Ohio, are cast in blue tones). Nearly a decade ago, Reddit users pointed out that viewers could spot a Breaking Bad scene in Mexico because the screen turned the color of straw.”

Film scholar Fahmidul Haque is on familiar terrain: “Pahela Baishakh (the Bengali New Year) rally does not take place at night and Dhakaites do not enjoy Hindi movie songs alone, they have also their own pop music icons.” 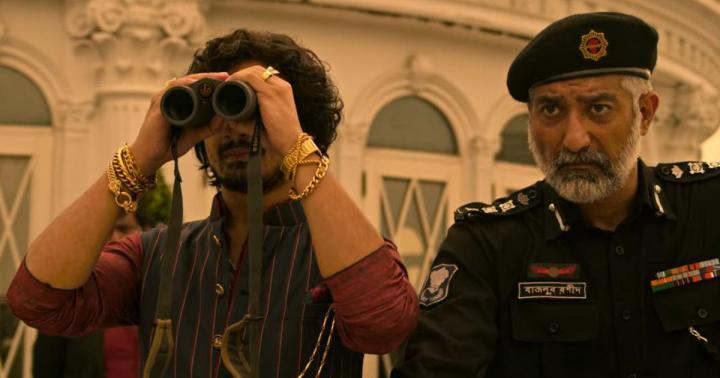 Journalist Faruk Wasif sees: “…all the elements of the racist Islamophobic mindset: Muslims cannot run the state, they have many children, their economy is a criminal shambles, their country is uninhabitable, their leaders are outlaws, there is no human dignity anywhere. The colours of this Bangladesh are as yellow as the desert. In contrast, the views of Mumbai are full of turquoise light – neat, beautiful, and luxurious.”

We prefer the savage self- critical tone of Faruq Hasan, who reminds us of the recent local product, DHAKA ATTACK: “Dear Netflix and Hollywood. Can you please learn something about how to accurately portray a city?

Like law enforcement officers who walk around in bomb disposal costumes, never taking any ghush and always protecting the weak? Mohila reporters in full makeup, constantly reporting the truth and never getting accused under the Digital Security Act? An evil villain who was raised in phoreign country and who has phd knowledge about chemistry because he grew up watching BTV episodes of Macgyver?

This is how our movie industry portrays the great city of Dhaka, can you pls stop imposing your balsal culture and learn from us cos we obviously know our city the best?”