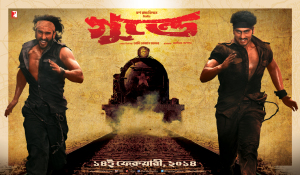 Liberation through the Gunday lens
By Fahima Durrat for AlalODulal.org

Factual errors made in a fictitious storyline may seem like a trivial matter, but they can hide icebergs. The iceberg that showed its tip in the film Gunday seems to have reappeared again in the headlines of Indian newspapers. Bangladesh protests against “distortion” of history, they report. Those inverted commas reveal a deeper source of offence.

Distortions made in the movie may be small but they are telling. Bangladesh was born on March 26 – a day after the genocide of 1971 started with brushfires in university halls, police barracks, roadside slums in Dhaka and across the river on people fleeing the city next morning. Bangladesh was libertated from the oppressive regime when Pakistan surrendered, not to the Indian army, but to the Bangladesh-India allied force. The chiefs of the victorious force were both represented by their subordinates as Pakistan’s commander signed the document.

While this moment was undoubtedly precipitated by aerial and naval offensive during what India counts as a distinct third war with Pakistan, it was by no means caused by them. The Indian narrative contained in Gunday is reminiscent of wartime statements produced by Karachi and its local collaborators condemning ‘India’s conspiracy supported by the Hindus and the misguided people of East Bengal,’ and ‘Indian agents on sabotage missions inside Pakistan territory.’ That the friend’s narrative would corroborate the opponent’s is baffling, to say the least.

The 1971 Indo-Pak war may have been just another in a series of Indo-Pak wars, a separate war overlapped with it through its own sets of actors and goals. It presented an opportune moment for India to strike a justifiable blow to its regional competitor and help create a smaller, friendlier neighbour in the process. Nineteen seventy-one was the moment in history when our interests had aligned and our wars coincided.
The direct deployment of Indian forces in December was preceded by the long war Bangladesh had been waging since March. The people of East Bengal had to put up resistance against the march of a raping, killing and plundering force – at first in a spontaneous and uncoordinated manner and then, with the ally’s assistance, in a structure – without any clear plan or calculation of pros and cons.

The Gunday prologue and other such portrayal write over the history of cultural resistance and political struggle waged by the people of East Bengal since the late 1940s. As appreciative as we are of the vital material and diplomatic support provided by our neighbours and indebted to them for sheltering millions of refugees as well as training camps, depicting our liberation as an offshoot of its border skirmishes remains indefensible.

Reducing the nine months of 1971 to a 13-day war erases how we had a leader in Sheikh Mujib who mobilized a nation and articulated its hopes and despair in one poetic speech on 7 March, and a skipper in Tajuddin Ahmad who navigated treacherous domestic, regional and international waters with the government-in-exile to bring us ashore. It makes insignificant the valiance of our army, composed of a regular force and a people’s force consisting largely of students and farmers, its eleven sector commanders who achieved legendary reputation through the likes of Colonel Taher and Khaled Mosharraf, and the mythically fearless groups led by Kader Siddiqui, Siraj Sikder, Major Afsar, M A Beg etc that kept their respective zones free from the marauding Pakistan army. That war was waged by undertrained guerrillas hitting fully equipped companies of soldiers, getting dissipated with each suicidal sabotage or rescue mission, getting ratted out by treacherous local collaborators and turning into lumps of blood after losing fingernails and other parts to torture, having their bodies float in flocks down the river behind Laksham cigarette factory, or displayed for days as a message to others in Rajshahi and Sylhet, or half-buried across the land in shallow graves that they were made to dig out for themselves. India is welcome to celebrate its wins and enjoy their outcome. Bangladesh earned its independence the hard way and justifiably wants that to be appropriately acknowledged.

It should not come as a surprise that Bangladeshis were anxious to see the ally army leave as soon as the war was over. Even though we didn’t inherit the paranoid, self-defeating phobia that consumed Pakistan, we were acutely aware of the political and economic strength of the neighbour who surrounds us from three sides. We remain especially aware of it in view of Sikkim’s annexation to the Indian union, Nepal’s subservience to Indian money and the never-ending struggle for self-determination in the North Indian states.

Our discomfort has only been propounded over time by the very skewed trade balance with the country (discounting the amount of smuggled products that enter our market bypassing taxes and scrutiny), by the influence it wields (real and perceived) over matters which should only be dictated by the people’s will, and by conspicuously unequal deals (e.g. the recent one for an environmentally expensive power plant near the Sundarbans and another for transhipment over our territory in exchange for nothing except loans for the upkeep of the route).

The resentment over how India perceives our liberation war and portrays its role in it comes as another straw to the burden of the many river projects upstream that perch arable land, choke waterways, ruin industries by turning the water saline and, when there is excess of it, allow communities to drown downstream. It is a sprinkle of salt to the bodies of our shot, battered, raped, killed and abducted citizens at the border. Our wounds smart even when they are petty smugglers murdered without having posed any real threat to the armed patrol while making money for the supplier in the transaction, irrespective of whether their bodies are dragged away for negotiations at flag meetings or left hanging from the barbed wire fence in utter indifference.

It adds up to the indignity of being viewed as the source of illegal labour (notwithstanding the 500,000 Indian workers, both legal and illegal, remitting $3,716 million annually(1) ) and of extremist elements bent against India’s sovereignty (regardless of the similar role it plays in our internal affairs). However childish it may seem for the people of a whole country to get worked up over something as insignificant as a Bollywood flick, in context it would turn out to be symptomatic of a recalcitrant injury.

If the struggle was once against a direct, physical subjugation to Pakistan, it is now against a latent structural disadvantage vis-a-vis India. This one is also played out in the fronts of economic independence and political autonomy. This fight to establish social and cultural distinctiveness from the elitist and invasive Hindi-centric Indian nationalist project is no less important than the fight against the elitist and alien urdu-centric Pakistani nationalist miscarriage. This is why there is a resounding refusal to swallow blatant factual errors, made in callous indifference and entrenched in the everyday media, about central parts of our history.

It is not, by any means, merely a nationalism-fuelled attempt to extract a patronizing apology (which completely misses the point) from a production company. Like the collective outrage during Shahbagh protests against leniency towards the war criminals of 1971, it is a statement made by a people united against an injustice.

Fahima Durrat is a graduate of Peace and Conflict Studies from the University of Dhaka.

One thought on “Liberation through the Gunday lens”