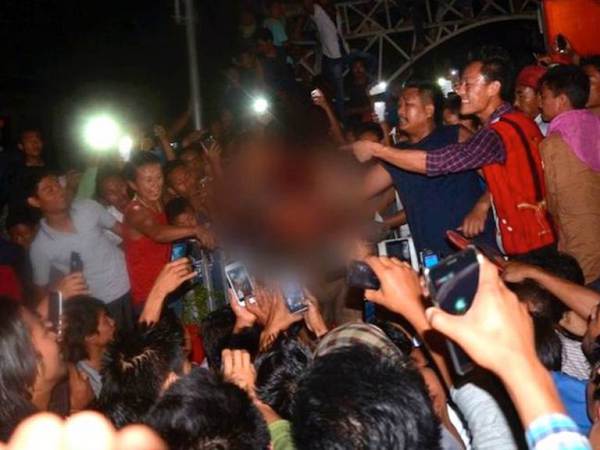 [I]n the Northeast [of India] IBI no longer has a literal meaning nor is it about citizenship, it is a racist shorthand, a template; a discursive formation under consolidation since the late 1970s which represent Bengali Muslims in the Northeast…”

Nation’s Honour, ‘IBIs’ and the Dimapur lynching
by Bonojit Hussain, cross-posted from Kafila

On 5th of March a mob of few thousands stormed the Dimapur central jail [India] and after having dragged jail inmate Syed Sarif Uddin Khan, brutally lynched him while a gleeful lot clicked photographs of the lynching with mobile phone cameras.

Since the night of 5th March photographs of the brutalized dead body and a video of the lynching has gone viral on social media and activists across the country has rightfully condemned this horrific act of mob lynching. But most activists are under the impression that the outrage and subsequent lynching was because a Sumi Naga woman was allegedly raped by Syed Sarif Uddin Khan on the night of 23rdFebruary. But one needs to understand that the outrage and the lynching of Khan wasn’t primarily about rape of a woman, it was more about how an outsider, more so a ‘lowly’ IBI (a very popular acronym for Illegal Bangladeshi Immigrant), has violated  the Naga nation’s honour reposited in the bodies of its women by raping one of its ‘daughters’.

Syed Sarif Uddin Khan was originally from Karimganj district of Assam, and ironically comes from a family of Armymen. It is also true that he had been a long time resident of Dimapur, was married to a Sumi Naga woman and has a three year old daughter. But none of these facts matter because Syed Sarif Uddin Khan will remain an IBI for the lynch mob and scores of other people in Nagaland. This is so because most people in the Northeast believe that all Bengali Muslims are IBIs.

I have written elsewhere that in the Northeast IBI no longer has a literal meaning nor is it about citizenship, it is a racist shorthand, a template; a discursive formation under consolidation since the late 1970s which represent Bengali Muslims in the Northeast as a homogeneous ‘collective’ that is “lesser humans”, “menace” or in its extreme form as “locust”. This discursive formation is constituted through the deployment of series of clichés like sexual virulence, natural (almost genetic) proneness to criminality, uncivilized to the extent of being inhumanly dirty or unhygienic, breeds faster than dogs etc. Deployment of these kinds of clichés has remained the hallmark of regressive process of racializing a targeted group of people throughout the world, much of the anti immigrant racist movements in the first world also deploy similar clichés. The cliché of sexual virulence is made to stand out, so that ever member of the racialized group becomes a potential predator waiting for opportunity to violate the honour of  the host nation that is believed to be embodied in the physical selves of the nation’s women.

This discursive formation draws its historical nutrients from the complex and yet unfolding history of the eastern theatre of partition of the sub-continent. In the ethnically balkanized milieu of the Northeast, Bengali Muslims are easiest target of racialized otherization; and this otherization does not become easy because they are different, but because in terms of certain cultural markers they are similar to the perceived embodiment of Bangladeshiness.

IBI as a discursive formation first got consolidated during the anti-Bangladeshi immigrant Assam Movement (1979-1985) and provided various ethnic/nationality movements in the Northeast with a ready-made template of otherizing Bengali Muslims irrespective of their citizenship status compounded by a tacit impunity regarding killings of Bengali Muslims, which started from the Nellie genocide of 1983 in Assam.

Some analysts in the Northeast have tried to explain the anger and outrage that led to the horrific incident by pointing out the ‘egalitarian’ nature of Naga society. According to National Crime Records Bureau data, in 2013, only 51 cases of crime against women were registered in Nagaland as against the all India figure of 309,546 cases. The argument goes that in a society with such low level of crime against women, a heinous crime like rape is bound to lead to a serious public anger and outrage. What these analysts fail to mention is that scores of crime against women go unreported and many such cases are adjudicated under Naga Customary Law by traditional bodies.

It is true that in many societies in the Northeast status of women is far better compared to many parts of mainland India, but it doesn’t mean that crimes against women do not occur and it is not uncommon to read in local media reports of molestations, harassments, kidnapping and rape. Just four days after Syed Sarif Uddin Khan allegedly committed the crime, on 27th February a 39 year old Konyak Naga man raped a 6 year old girl in Mon district. It was reported in local media that the incident took place when the accused, father of two, had gone to attend a funeral service Friday, and on his way home, he allegedly lured the victim to buy sweets at a shop and committed the crime at his house. It didn’t lead to any outrage, not even a statement by any civil society organization.

Even in this particular case none of the outrage that led to the lynching has been directed towards the fact the accomplice in the alleged rape is a Naga man. This Naga person was also arrested on 24thFebruary along with Syed Sarif Uddin Khan and is currently lodged under judicial custody in the same Dimapur central jail from where Syed Sarif Uddin Khan was dragged out, paraded in chains before being lynched. In fact local civil society organizations and local media have actively downplayed this fact to the extent that the identity of this Naga person has not been revealed in the public domain till today.

For past few years there has been a growing clamour against IBIs in Nagaland, especially in Dimapur. In fact, coincidently on 24th February, the day Syed Sarif Uddin Khan and his Naga accomplice were arrested, Naga Students’ Federation (NSF) as a part of their then ongoing state-wide campaign tour against IBIs had organized a Consultative Meeting in Dimapur with the Naga Council Dimapur, tribal hohos and Union, Dimapur Naga Mothers’ Association and its constituent units, Dimapur Chamber of Commerce & Industries (DCCI), and Dimapur town ward/colony leaders. A day prior to consultative meeting NSF has issued a strong worded statement signed by NSF president Tongpang Ozukum and finance secretary Shikavi Achumi vowing to “tackle the menace of illegal Bangladesh immigrant”. The statement also strongly condemns National Socialist Council of Nagaland – Isak Muivah [NSCN (I-M)], which runs a parallel Government in Nagaland, over the allegation that NSCN (I-M) had appointed one Nurjahan Hussain as a tax collector, in this regard the statement said: “If the claim of Nurjahan Hussian as one of the tax collectors of NSCN (I-M) is true, then it is a disgrace to the entire Naga people … “Naga people will never agree to fight for our inherent rights with the support of nomads and illegal immigrants; rather, Nagas will choose to fight a lone but honourable battle to achieve our goal.”

The alleged rape committed by Syed Sarif Uddin Khan was on 23rd February, the victim filed a police complaint on 24th February and on the same day Khan and his Naga accomplice were arrested. However the news was not reported in the local media until 3rd of March, and that is when civil society organizations swung into action.

In the cacophony of statements that were issued by various civil society organizations in Dimapur, the central issue of the alleged rape and violence against women in general took a back seat as all the statements made it a central issue that an IBI has yet again raped a Naga lady.

The question that should baffle everyone is that how does the society differentiate between rape of women by men of their own community and by men of other community, in this case more ‘detestable’ outsider, the IBI?

To the best of my knowledge, between 3rd and 5th March these Naga and non-Naga civil society organizations in Dimapur issued condemnation statements saying that an IBI has yet again committed asexual crime against a Naga lady, some of whom demanded that the accused be handed over to be tried by Customary law: Naga Council – Dimapur (NCD), Naga Women Hoho – Dimapur (NWHD), NSF, Central Nagaland Tribal Council (CNTC),  Central Nagaland Students’ Association (CNSA), Western Sumi Kukami Hoho (WSKH), Sumi Officers Union of Dimapur (SOUD), Mao Hoho of Dimapur (MHD), Dimasa Public Organization (DPO), Dimasa Women Welfare Society of Nagaland (DWWSN),  Nagaland Bhojpuri Samaj – Dimapur (NBSD) and Manik Bhattacharjee Foundation (MBF). It is worth mentioning here that most of these statements have disappeared from the internet after the 5th March lynching, and what remains are excerpts printed in local newspapers.

Two of the most influential civil society organizations – the Naga Council – Dimapur (NCD) and the Naga Women Hoho – Dimapur (NWHD) – were the first to issue a joint statement in which they proclaimed that the rape “exposes Naga weakness”. The Morung Express published a photograph of the Syed Sarif Uddin Khan on the first page of the 4th March edition of the newspaper with a screaming headline that read “Heinous crime exposes Naga weakness says NCD & NWHD”. The joint statement, signed by NCD treasurer Chiten Konyak and NWHD president Hukheli T. Wotsa, claimed that “unless all Nagas take responsibility to tackle the menace of unabated IBI influx and their stay in the state, crime against our women and daughters by these people will only increase”. It further stated that if “Naga society refuses to wake up such crimes will only keep recurring and Nagas can only watch and condemn meekly”.  The statement ended with a cautionary advice to Naga society “Lastly, Naga families would also do well to learn that marrying off their daughters to IBIs or adopting them does not beget anything good.”

NSF also issued a strong statement signed by the president Tongpang Ozukum on 3th March where it stated that “time and again Naga civil societies have raised concerns about the danger of harboring Illegal Bangladeshi Immigrants (IBIs) in our own home, giving them shelter and security … it is because of our obstinate attitude and relaxed nature, such heinous crime is being committed by the IBIs without any hesitation”. Asserting that the recent incident was not just a heinous crime but a direct challenge to the entire Naga community, the statement further said that “unless we act tough on these people, slowly but surely these people become masters our Nagas in our own land”.

While there is little doubt that the mob lynching would not have been possible without complicity of the police force at various levels, Nagaland Chief Minister TR Zeliang in a kneejerk reaction has blamed social media users for the flare-up and the subsequent lynching. It would do well to both CM TR Zeliang and Naga society at large if he musters the courage to condemn and initiate action against the leaders of those civil society organizations that made libelous and false statements and calling for mob (in) justice.

In lieu of a long conclusion, let me end by recalling a 2004 solidarity meeting with Lieutenant General(Retd) V.S. Atem of Nagalim Army (NSCN I-M faction) in New Delhi. General Atem was then an interlocutor on behalf of the NSCN (I-M) in the peace talks with Government of India. Some of us comrades had asked the good General as to what would happen to all the non-Naga migrant workers and petty traders in the future Christian Socialist Republic of Nagalim, the good General smiled and said “We Nagas are simple folks, we will need the help of all our migrant friends to run the economy. They would be equal citizens”. One only wishes if the good General’s words would come through in spirit and in action.